After electricity is generated at a power plant, it is transported to customers. Cities, towns and provinces across the entire country are criss-crossed with power lines that "carry" electricity. Large generators produce electricity at about 22,000 volts. 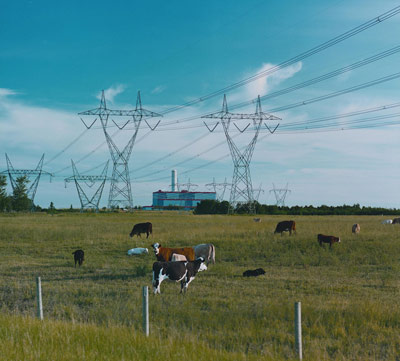 When electricity travels long distances, it is more efficient to use higher voltages. For this reason, electricity from the generator is sent to a power transformer that boosts the voltage up to 72,000 volts or 240,000 volts (transmission voltage).

Within your neighbourhood, a distribution transformer mounted on a pole (overhead distribution) or a concrete pad on the ground (underground distribution), converts the power to an even lower voltage (220/110 volts) for use in your house. Larger appliances, like stoves and clothes dryers use 220 volts and smaller appliances like lights, TVs, radios and computers use 110 volts.